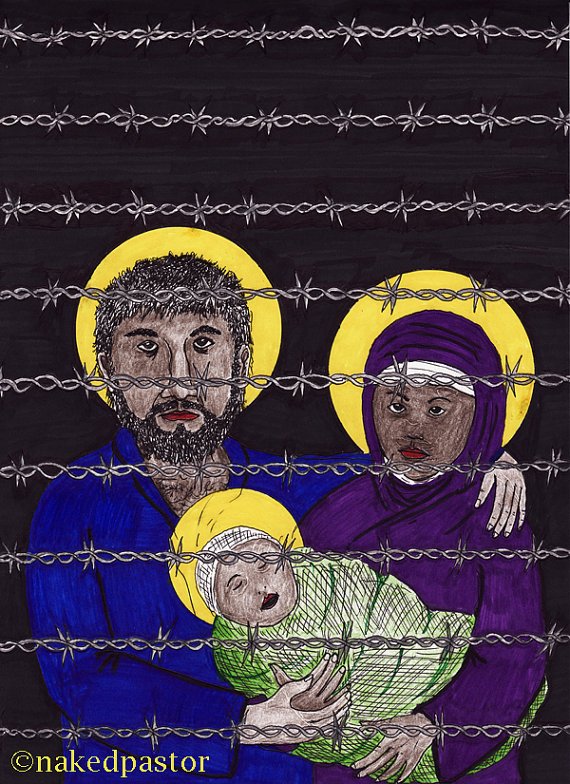 Here is a powerful statement of faithfulness. This is art that is challenging power while proclaiming the Gospel. I am inspired that there are believers like the #nakedpastor who still have the courage to speak the truth to those in authority and remain true to the call of Jesus in our lives.

#BLOTUS would not allow Jesus and His parents into the United States today, even if they were fleeing for their lives.  Drumpf knows the danger the Christ child is to his  administration’s views and wishes.

I have hidden behind walls of barbed wire and concertina in Vietnam.  It can make you feel safer. But, the thing to remember is that walls hold you in  just as much as they keep others out. And I, for one, don’t like being a captive. 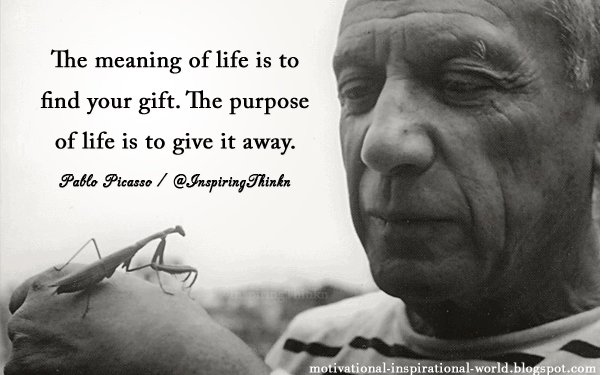 The words of Picasso ring true for me. I believe every single one of us are born as unique and gifted individuals. Each of us have a special gift that we can and should share to make the world a better place.

True joy is when we are finally able to recognize that gift and begin sharing it. It is in the giving of our gift that we begin growing into our full humanity. How easy it is to forget that business, work, recreation and all our social interaction isn’t the real purpose of our lives. We get caught up in the details and forget that to truly live we need to give ourselves for others.

The Dalai Lama is right. All of us have a thousand opportunities every day to make a real difference in the lives of those most in need, Each of us has the time to make another’s life a little bit better and maybe even a lot better.

We can end hunger in our lifetime. We can change the world forever. It just takes the recognition that we are called to help others, and that despite our superficial differences, we are truly one family. This familiar quote by the founder of Methodism never loses its appeal to me. Every time I hear it used or every time I see it quoted again reminds me that we have an unending responsibility “to keep on keeping on.”

What continues to inspire me is that John Wesley didn’t just preach about doing good. He demonstrated the “do all the good you can” philosophy every day of his life. He preached to the poor, visited those in prison, and never ceased crusading for those marginalized by society.

Mr. Wesley would  not be popular in today’s United Methodist Church. He would be disgusted by (what would appear to him as) the laziness demonstrated by the majority of today’s clergy. He would find the amount of time we waste as both abhorrent and inexcusable. He simply wouldn’t tolerate the lack of zeal we demonstrate as leaders of the people called Methodists.

He wouldn’t be gentle in instructing us about doing good at all the times we could. He would be quick to administer a solid kick to the seat of our pants with a loving reminder that we are to do all the good we can for as long as we can.

And I am quite sure Mr. Wesley would let us know in no uncertain terms that there is no retiring from doing all the good we can. Wesley was raising funds for the poor in snow and ice less than two weeks before he died. But then, for him,  doing good wasn’t a career. It was a calling.