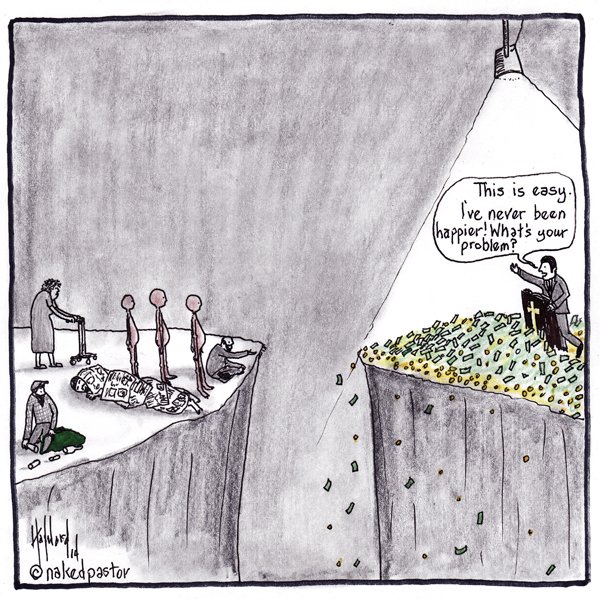 What a wonderful illustration of the great divide. This delightful cartoon tells the story of one of my favorite quotes.

A church that is happy and taking its ease during these times is a church that doesn’t comprehend the love of God, or the gospel of Jesus Christ. And any Christian leader that isn’t outraged at our government’s treatment of the poor and marginalized needs to wake up and pay attention.

These poll results, from October 2016 are disturbing as they are frightening. They do, however, explain a great deal.

Those voters claiming no religion clearly understand the lack of moral values on display by #BLOTUS. What is so alarming about this is that White Christians all feel much more strongly that this man has a strong moral character.

When non Christians can see the lack of moral character in #BLOTUS while Christians cannot, it is a strong indictment on our lack of teaching in the Church. Somehow we have not been taught  true Gospel values. Either that, or the Church has completely sold out to society.

Actually, both are probably true. We have allowed ourselves to be blinded to the ugly reality of society so flagrantly demonstrated by #BLOTUS. The racism, the hatred, the bullying, the bigotry, the nepotism, the greed, the lying are no longer seen as moral character flaws, but are even admired.

There’s a vast chasm between faithfulness to the Gospel and blind patriotism. It saddens me that the majority of those attending Church this morning cannot see that. Their unwavering support of a liar who consistently lives so contrary to the values taught by Jesus proves they are blind to reality.

I am not sure about democratic socialism. The sound of that is enough to cause me pause. History has taught us that socialism is a term and political system we all must fear.

But, I have no problem agreeing with both Dr. King and the Honorable Mr. Sanders. They are absolutely correct in calling for a better distribution of wealth for all of God’s children.

Income inequality in our country continues to grow, and the ever-widening chasm between the obscenely rich and the desperately poor is the most dangerous divide our nation faces. This is a clear and present danger that is actually far more frightening than the term socialism.