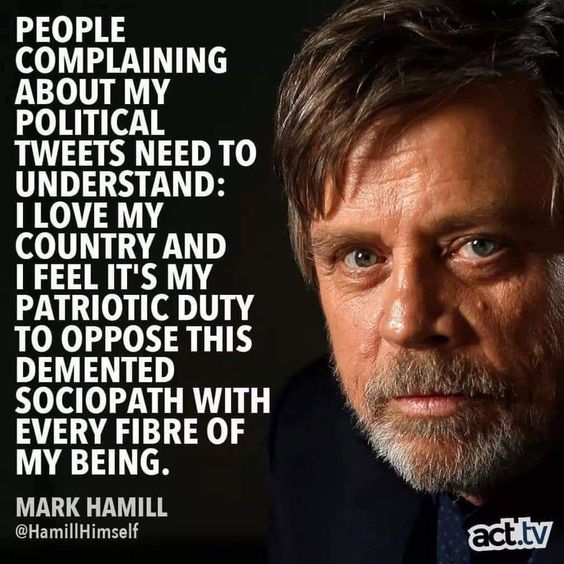 When I was nineteen I swore an oath to defend my country. I have seen nothing in the intervening 50+ years that releases me from that promise.

My tweets, my Facebook posts, and my blog are all attempts to remain faithful to that oath I made when I became a Marine. I love this country far too much to allow a lying whoremonger to destroy all that it stands for around the world.

As more and more of the Republican in the House and Senate blindly join in lock-step to support #BLOTUS, we have to understand the depth of their treasonous behavior. They are putting self interest above their sworn duty. And they know that is what they are doing.

The president should be held fully accountable for all his disgusting words and actions. In my opinion that means impeachment and criminal charges. And if his toadies (is their a better word?) refuse to do their duty, they need to be removed from office and replaced with patriots.

If we do not use the gift of our citizenship we deserve what we currently have. And that is more than sad. It’s pathetic.

“The President is merely the most important among a large number of public servants. He should be supported or opposed exactly to the degree which is warranted by his good conduct or bad conduct, his efficiency or inefficiency in rendering loyal, able, and disinterested service to the nation as a whole. Therefore, it is absolutely necessary that there should be full liberty to tell the truth about his acts, and this means that it is exactly as necessary to blame him when he does wrong as to praise him when he does right. Any other attitude in an American citizen is both base and servile. To announce that there must be no criticism of the President, or that we are to stand by the President, right or wrong, is not only unpatriotic and servile, but is morally treasonable to the American public.”

This quote by President Roosevelt was a part of the 17 minute retirement speech delivered to his colleagues yesterday by Republican Senator, Jeff Flake of Arizona. He basically said he was retiring because of the coarseness of the leadership of our nation, and that he could no longer be complicit in the undermining of the core values that has made our country great.

I salute the Senator for his courage and applaud his public denouncement of the crude, boorish, and destructive methodology of #BLOTUS.  More of our national leaders need to have the strength of character to be openly critical of the current President and his outrageous, infantile, and morally indefensible behavior. Silence in the face of the actions of this president is not only unpatriotic, but in the words of Roosevelt, “morally treasonable to the American public.”

This admonition by a former President is well worth remembering as we draw ever closer to the BLOTUS  being officially installed in the highest office of the land. The American public has a patriotic duty to hold every President to the highest standards. Not to do so goes beyond being unpatriotic, it is moral treason. I have never called it duty, but I love this quote by Bukowski, my favorite contemporary poet. My entire adult life has been consumed with a burning desire to create a world without hunger. That focus has led me to over 100 countries and more areas of conflict and devastation than I can count, and it has introduced me to an entire world of caring and compassionate people who live to make a difference in the lives of those most in need.

Whether I see a hunger-free world or not, the ashes of my life will forever hold the warmth of all those who have given themselves to this grand, glorious and world-changing vision. Thank you, one and all, for caring enough to help end hunger in our lifetime.

I do not know John Taylor Gatto. Recently, however, I came across a quote on prayer attributed to him that resonates with me. It is a fitting reflection as we begin the new year. I would love to know what you think of Gatto’s words.

I pray for strength to accept that lives most often end in tragedy, that quests don’t always work, that understanding is a long and lonely hunt, that I can’t reason my way to love, eat gold, or live forever. And that none of this matters. I pray to understand that I am here to find my way back to God, whatever that takes, and all the rest, save love and duty, is an illusion.