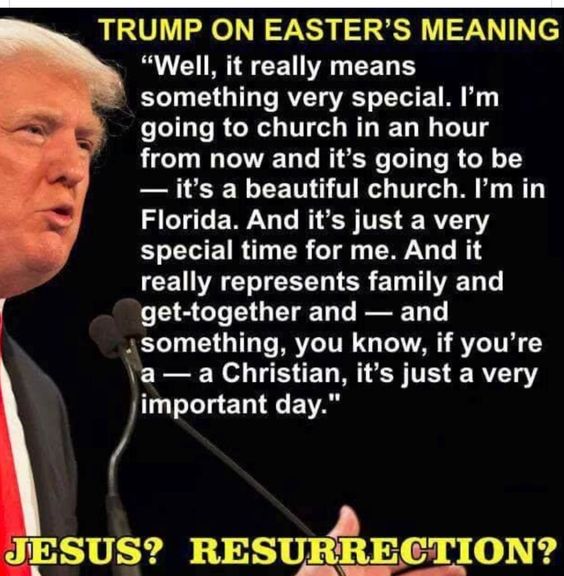 This is our Christian President…really? It’s a beautiful church with no name. But, actually Easter is a time for families, get-together and golfing…the perfect Christian description of the holiest and most sacred day of the liturgical year.

Now I understand why the white Evangelicals adore this man. He is the perfect embodiment of their values. He knows almost as much about discipleship as he does about governing.

Today, Ash Wednesday, marks the beginning of the season of Lent. Christians around the world observe Lent as a time of introspection, sacrifice and preparation for the coming of Holy Week and Easter.

Traditionally, it’s a time when Christians “sacrifice” by giving up something during this period. Fasting from favorite food or drink has always been high on the list, as has abstaining from enjoyable activities like books or movies.

But Lent can also be a season of service, as well. What if Christians “sacrificed” personal time and gave that time to working with the poor in their communities? What if Lent became a season of joyful giving of ourselves to those needing a friend or companionship? Why couldn’t Lent become a time when Christians daily shared the love of Christ with those most in need?

The season of Lent can be observed in a variety of ways. For me, however, there’s no better way to prepare myself for the observation of Christ’s sacrificial love than to practice that love with the poor, the hungry and those most in need.

On this Good Friday I want to share a photo and brief story from my FACEBOOK feed. What a truly beautiful way to celebrate the joy of Easter.
How we treat the least of these is exactly how we treat their Creator. Pope Francis demonstrates a love for the poor that we all should emulate.

Here are some of the 150 homeless men, women and children invited to the Sistine Chapel yesterday by Pope Francis. The Pope met privately with them, asked for their prayers and said, “This is your home.” Afterwards they were invited to a special dinner.

This beautiful photo is itself a meditation on many truths: First, we are reminded of St. Lawrence bringing the poor to a third-century Roman emperor and saying, “Here are the true treasures of the church.” Indeed, here they are: the greatest treasures of the church before the greatest artistic treasure. Second, it is a unique meditation on the communion of saints, above and below. The people in this photo, seated below, are part of the great communion of saints, who are included in Michelangelo’s masterpiece, which depicts not only those going to hell but the saved, those being invited into heaven. And what is the litmus test for entrance into heaven? As Jesus says in Matthew’s Gospel, it is how you treat the poor. Third, it is a meditation on humility. The Pope asked that no photos of himself be taken. Fourth, it is a meditation on how the church can treat the poor: the way that the father treats the prodigal son in Jesus’s parable in Luke’s Gospel: lavishly, prodigally, over the top. Why should we stint when it comes to helping the poor? Finally, it is a meditation on joy. Look at the faces of these these men and women when they are treated as human beings, and not simply as objects of charity or as bothersome problems in our cities and towns. The Joy of the Gospel, Evangelium Gaudium, is real, and it can be found here on earth.

The following piece is an article by Christopher Hale. He is a senior fellow at Catholics in Alliance for the Common Good and is also the co-founder of Millennial. Ash Wednesday was last week, and marked the beginning of Lent.

Christians around the world mark the beginning of Lent with the celebration of Ash Wednesday. This ancient day and season has a surprising modern appeal. Priests and pastors often tell you that outside of Christmas, more people show up to church on Ash Wednesday than any other day of the year—including Easter. But this mystique isn’t reserved for Christians alone. The customs that surround the season have a quality to them that transcend religion.

Perhaps most notable is the act of fasting. While Catholics fast on Ash Wednesday and on Fridays during the Lenten season, many people—religious or not—take up this increasingly popular discipline during the year.

But Pope Francis has asked us to reconsider the heart of this activity this Lenten season. According to Francis, fasting must never become superficial. He often quotes the early Christian mystic John Chrysostom who said: “No act of virtue can be great if it is not followed by advantage for others. So, no matter how much time you spend fasting, no matter how much you sleep on a hard floor and eat ashes and sigh continually, if you do no good to others, you do nothing great.”

But this isn’t to downplay the role of sacrifice during the Lenten season. Lent is a good time for penance and self-denial. But once again, Francis reminds us that these activities must truly enrich others: “I distrust a charity that costs nothing and does not hurt.”

So, if we’re going to fast from anything this Lent, Francis suggests that even more than candy or alcohol, we fast from indifference towards others.

In his annual Lenten message, the pope writes, “Indifference to our neighbor and to God also represents a real temptation for us Christians. Each year during Lent we need to hear once more the voice of the prophets who cry out and trouble our conscience.”

Describing this phenomenon he calls the globalization of indifference, Francis writes that “whenever our interior life becomes caught up in its own interests and concerns, there is no longer room for others, no place for the poor. God’s voice is no longer heard, the quiet joy of his love is no longer felt, and the desire to do good fades.” He continues that, “We end up being incapable of feeling compassion at the outcry of the poor, weeping for other people’s pain, and feeling a need to help them, as though all this were someone else’s responsibility and not our own.”

But when we fast from this indifference, we can began to feast on love. In fact, Lent is the perfect time to learn how to love again. Jesus—the great protagonist of this holy season—certainly showed us the way. In him, God descends all the way down to bring everyone up. In his life and his ministry, no one is excluded.

“What are you giving up for Lent?” It’s a question a lot of people will get these next few days. If you want to change your body, perhaps alcohol and candy is the way to go. But if you want to change your heart, a harder fast is needed. This narrow road is gritty, but it isn’t sterile. It will make room in ourselves to experience a love that can make us whole and set us free.

Now that’s something worth fasting for.