The following news brief is taken from a SHN staff memo:

Stop Hunger Now India continues to provide relief to those affected by the severe flooding in Chennai. Executive Director Dola Mohapatra has issued an update on the response, as well as an appeal to donors for additional support. Here is an excerpt:

As an immediate response to this emergency situation, Stop Hunger Now India, in partnership with Treasure Life Foundation, Hope Foundation and Rural Relief Network/SAARP (as well as few other local NGOs and civic groups) has provided nearly 150,000 meals to over 5,000 families in Chennai and Cuddalore areas, including the cut-off pockets in rural Panchayats.

As you may have been seeing the news items across the TV channels, the situation is quite grave and we have been receiving SOS requests from a number of local groups.  The field teams responding to the current situation have requested immediate help for food packets, medical supplies, clothes etc.

We are gearing up to send 300,000meals for the affected families.  We also have received requests for mats, tarpaulins, water-filters, tents and bed sheets, water containers, warm clothes, school supplies for children etc.  We have a warehouse in Bangalore where these materials are being collected and the field team will be able to pick up all these once a truck load of materials are gathered.

The United Nations warned today that 30,000 people are “facing starvation and death” in war-torn South Sudan. The UN World Food Programme, UNICEF and the Food and Agriculture Organization are demanding immediate access to these starving war victims, who are in Unity State.

The war in South Sudan, between the government and opposition groups, has caused extreme hunger. Farming in conflict areas cannot take place. What little food is available has become high-priced.

Nearly four million people are living with severe food shortages and on the brink of famine. Many displaced families report eating only one meal a day, consisting of fish and water lilies.

The violence has blocked humanitarian aid from reaching civilians, leaving children especially vulnerable to deadly malnutrition. UNICEF’s South Sudan representative, Jonathan Veitch, warns, “Since fighting broke out nearly two years ago, children have been plagued by conflict, disease, fear and hunger. Their families have been extraordinary in trying to sustain them, but have now exhausted all coping mechanisms. Agencies can support, but only if we have unrestricted access. If we do not, many children may die.”

As long as the violence persists, hunger will only continue to escalate. War means hunger. Oxfam’s Zlatko Gegic says, “civilians are fleeing their homes and making the treacherous journey to safer locations, only to be faced with starvation as aid organizations are blocked due to fighting. Many children have arrived alone, their mothers killed in the fighting or during the journey, with nothing but the clothes on their backs, surviving on plant roots and whatever else they can forage.”

Malnutrition causes lasting physical and mental damage in children, so it’s urgent the food reaches them quickly. The UN World Food Programme (WFP) is the lead hunger relief organization in South Sudan. Along with UNICEF, Catholic Relief Services and others WFP conducts emergency missions to relieve the suffering, provided they have access.

WFP depends on voluntary donations and this must be kept up to provide the food aid. The United States Food for Peace program is the single largest donor to WFP, and Congress has to boost its funding.

But a lasting peace deal between the warring parties has to take place for the humanitarian crisis to ultimately end. The alternative is famine for South Sudan. 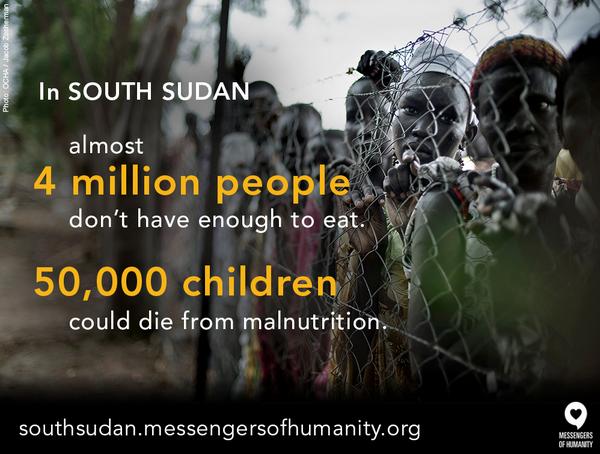 South Sudan is facing a real and immediate hunger crisis. The United Nations reports that less than half of necessary funding has been donated for this emergency. Our help is desperately needed.
Stop Hunger Now has been working in South Sudan for years, and continues to partner with Dr. Jill Seaman and others to make a difference in the lives of thousands. We need your help to do more. Visit our website to learn how we can work together to save the lives of these children.