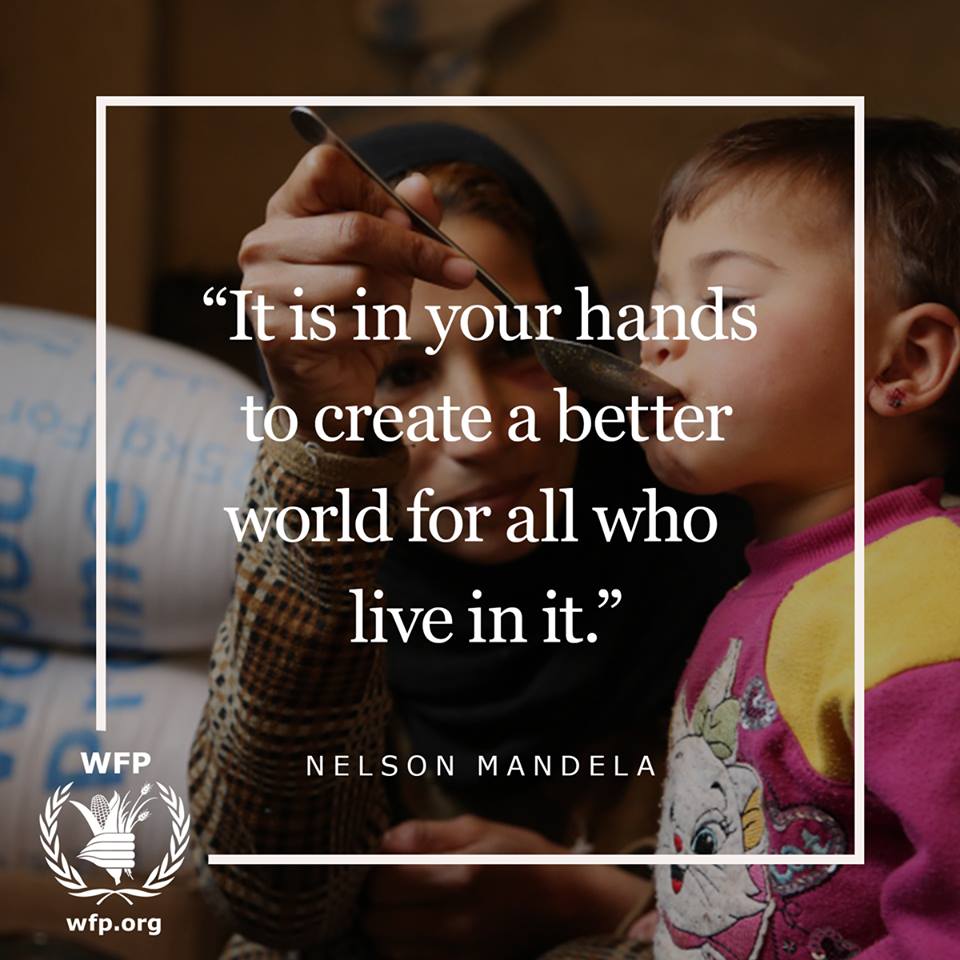 This has always been true. Each of us has the glorious opportunity to create the world we want. We can make a difference in the lives of thousands, even millions who live in crushing poverty and never escape the shadow of hunger,

Working together we can change the world forever. We can rewrite history. We can become a part of a global movement that truly ends hunger in our lifetime. This is my goal. And it’s always been the vision that drives Stop Hunger Now. Join with me and let’s create a better and more just world for all. 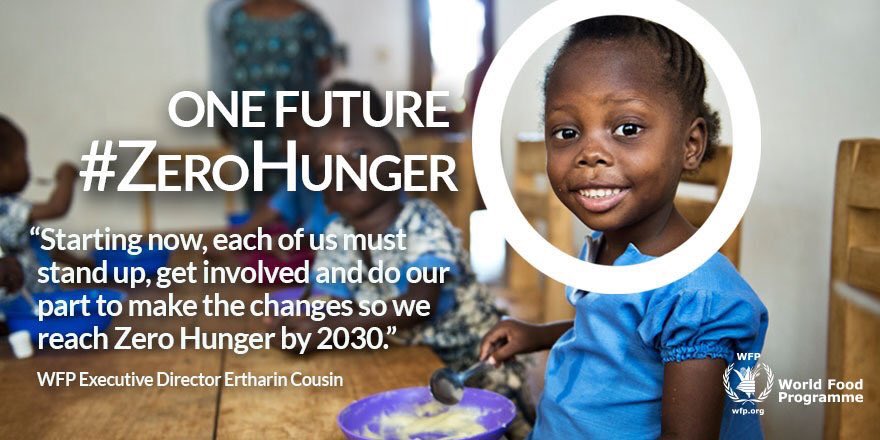 Working together we can make it happen! Join the growing global movement to end hunger by 2030. We are changing the world. You can help make history. Let’s stop hunger now.

[This post is reprinted from the Stop Hunger Now blog page]

Inmy first year participating in St. Philip’s 30 Hour Famine, I was initially most struck by the diversity of the people who joined together to fight hunger — young and old, poor and wealthy, religious and nonreligious, parents, high school and elementary school students. All people, all participants in the 2015 30 Hour Famine, were there because they wanted to be.

That’s what intrigued me: who would want to give up four meals, do some physical labor, and spend 30 hours not eating with kids of all ages whom they had never met before? I was interested to the point where I had to figure out what it was all about. I entered with curiosity — I had no expectations seeing as I had not partaken in any event like this before. And I had no idea what a life-changing experience I was about to have.

Typically, people are brought together over meals: holiday celebrations, cooking with parents, meeting up with friends for a dinner out. Yet, nothing has ever made me feel such a bond with others as voluntarily giving up our food for thirty hours to raise awareness for world hunger and poverty. How does your hunger help keep those thousands of miles away from being hungry? I’ve grown up asking myself the same question.

When I was in elementary school, the people working in the cafeteria would always scold the students who threw away their uneaten meals saying, “There are children starving in Africa!” However, it was never explained to us what we should do to help them — because clearly stuffing myself wasn’t going to make them less hungry and there was no efficient way to donate the excess food on my lunch tray to those in need.

It took until my sophomore year in high school before someone gave me an alternative that made sense to me: instead of taking what we have for granted, learn to live without and by doing so, learn to appreciate our privilege and do something with it.

We are lucky to be a nation that has to force ourselves to eat less, because we have the excess food at our fingertips. We are lucky to be able to deny our children dessert, because we have that dessert to deny. Why should we, who are only given these opportunities by chance, not feel some sort of responsibility to give others the same chance to eat a wholesome meal?

Going hungry is not the same as being hungry, and all of the participants at 30 Hour Famine were well aware of their privilege as they came together to package 20,000 meals for the hungry in Burkina Faso, one of the poorest countries in the world located in West Africa. We were all thankful that in 30 hours we would be guaranteed a meal, that the hunger we felt would pass. It made the experience more bearable, easing the grumbles in our stomachs.

However, while my feeling of hunger was pacified by knowing I could eat soon, my feeling of guilt at how lucky I am to be in the small portion of the world’s population that is guaranteed a meal at every breakfast, lunch, and dinner break was not as easily forgotten. We all were united with this recognition of our privilege and worked to grant others the same assurance of another meal, an escape from hunger, by taking donations at supermarkets, packing lunches, and making economical and substantial food through Stop Hunger Now and Catholic Relief Services in a system that uses basic ingredients to provide sustenance for a family of six for one meal.

Everything I learned — the hunger facts, the importance of unity, numerous causes to raise money for, greater appreciation for my privilege — is evident in my smile, my composure, my thoughts. I came to the 30 Hour Famine a blank slate ready to be changed — and I did change. I became more aware, more appreciative, and more global-minded. The most important thing for one’s first Famine experience is to come ready to be changed, and then to go inspire change in the world. Use the fuel given by the food are you are lucky enough to eat, and go fuel some change.

To learn more about the 30 Hour Famine and how you can participate, please visit http://stphilipnorwalk.weebly.com/30-hour-famine.html.

This article originally appeared on The Hour. Here is a WMD we have all already seen. It’s already here in the US and the stockpile is getting ever larger.

We ignore it at our own risk, not only both moral and spiritual, but in real terms, as well. Allowing poverty to grow is a clear and present danger.

We can eliminate poverty in our lifetime. Doing so is both right and possible. It just takes compassion and an active hunger for justice for all.

In the 10 years since, we have enlisted hundreds of thousands of volunteers who have packaged over 225 million meals at 19 locations in the U.S. and six more abroad. The Raleigh warehouse alone has packaged over 33 million meals, including nearly 4.6 million meals packaged last year by over 29,000 people at 278 meal packaging events.

To mark the 10th anniversary of our meal packaging program, Stop Hunger Now will host an event at its Raleigh warehouse on December 12, 2015,  that is expected to attract several hundred volunteers who will package over 100,000 meals. To register to attend, click here.

“We leverage the meals so we’re not just killing hunger pains but transforming lives and society,” says Darron Stover, Raleigh program manager for Stop Hunger Now. As a member of Fairmont United Methodist Church in Raleigh, which housed Stop Hunger Now for over 11 years starting shortly after it was formed in 1998, Stover participated in the inaugural meal packaging event. He then quickly volunteered to help organize and coordinate other meal packaging events. A year ago, he joined Stop Hunger Now as a full-time employee.

The Rev. Steve Hickle was pastor at Fairmont United Methodist Church and a member of the Stop Hunger Now board of directors at the time of the first meal packaging event. “We’re building a movement to end hunger,” says Hickle, who now is Faith Outreach Director for Stop Hunger Now. He has developed partnerships with over 30 Christian faith  groups and eight other faith groups in the movement to end world hunger.

Meal packaging provides a highly visible point of entry for people to get involved in eradicating hunger, which affects nearly 800 million people, down from one billion 20 years ago, Hickle says. “By offering this experience, we’re having an impact on education and development in many places,” he says. “We’re one piece of a growing movement, and we invite others to join with us in any place they can help end world hunger.”

Grab your family and friends (all ages welcome!) and join us for the 10th-anniversary commemoration in Raleigh.  Click below to save your spot!

This is what I have always wanted. What makes it so much fun is that we’re actually doing it. We are making the world a better place.

Our society is tremendously flawed and tolerates unbelievable injustices to be perpetrated on the poor. Yet, we are still moving the world in the right direction.

Working together we can create a better world. And like I already pointed out, it’s great fun. Let’s continue making it happen. Our children and our grandchildren will see it for what it is, a gift from our generation to theirs. What could be a greater legacy than being part of the global movement that ends hunger forever. We can create a hunger-free world. Let’s make it happen.

Last Friday evening I was honored at a special Stop Hunger Now event in Raleigh. Even though I knew it was coming, the evening still was full of surprises. The evening celebrated my work with the poor and hungry which was humbling, but it was also an opportunity to celebrate what we have all been able to accomplish.

The evening and the event could not have been more wonderful. From the opening private reception through the evening’s program, to the reception afterward, every detail was as meaningful as it was professionally executed. (The only thing that could have made the evening better would have been not having to be at RDU at 0500 the following morning for my flight to Malaysia.)

Even though I do not like to be in the spotlight, the evening allowed me another opportunity to lift up the needs of the poor and hungry before a very special group of people.

The 200 or so folks in attendance were all friends, partners and supporters of Stop Hunger Now. And they are all special, not because they attended an event in my honor. They are special because they are true leaders in the global movement to end hunger in our lifetime. I just wish there would have been more time to visit with each person present.

Friday evening’s celebration was  a testimony that we can change the world. Working together we are going to end hunger in our lifetime. The passion and commitment of those attending my legacy celebration will help make it happen.