I do not claim to be a Biblical scholar, but I am fairly certain that Jesus didn’t invite the lost, the broken, the weary, and the stranger into concentration camps to help keep the nation of Israel racially pure.

And when He said, “let the little children come unto me…” I know it was not to rip them from their parents and throw them into cages.

The Predator-in-Chief, the Attorney General, and the majority of Republicans disagree. But, their understanding of faithfulness and discipleship is far different than mine.

I am not sure what their religious beliefs are, or who they claim as their spiritual guide. What I am sure of is they have nothing in common with with the Christ of the Gospels.

The closest I can see them coming to Christ is found in the Gospel of Matthew, chapter 25. It is in verses 31 when He tells them, “Depart from Me, accursed ones, into the eternal fire which has be prepared for the devil and his angels.” 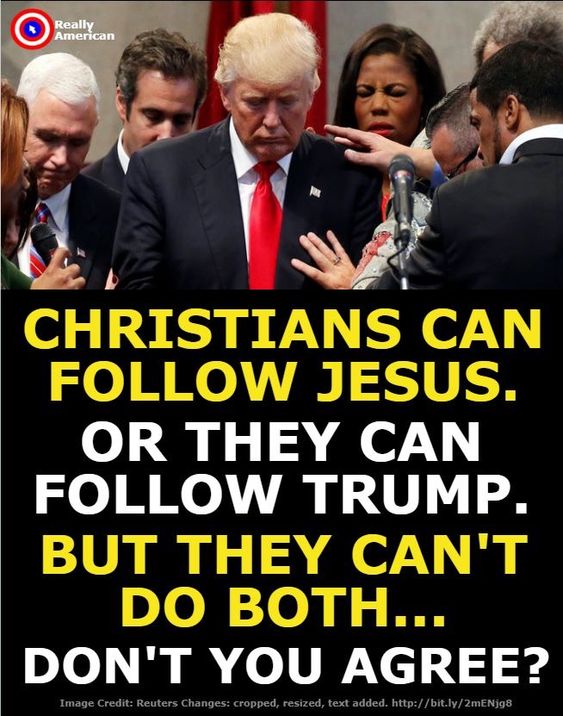 Even a cursory examination of the Gospels, even the most superficial comparison of the teachings of Jesus Christ and the words and actions of the #BLOTUS, is enough to see how great and how deep the chasm between the two. Donald Trump is the perfect example of how a nonbeliever speaks and acts.

Discipleship and faithfulness to Jesus Christ is a way of life. It’s a lifestyle that is both observable and easily identifiable. Anyone who honestly believes that Trump is a Christian, or even a good person, has no concept of who Jesus was or what he demands of those who follow Him.

The fact that over 80% of white evangelicals voted him into office speaks volumes about the lack of Biblical literacy in our nation.  The continued support given to him by those in the church should be a wake-up call for believers everywhere.

How anyone can follow the Christ of the Gospels and support Donald Trump is literally beyond my limited comprehension. I am willing to be enlightened, but I will readily admit I will take some serious convincing.

Not sure exactly where this is found in the gospels, but I am sure it should be there. Christians have always been identified by our love. Hate has no place in authentic spirituality.

“[T]here remains [in some parts of the country] a strong bias towards the old error, that without some sort of alliance or coalition between Govt. & Religion neither can be duly supported. Such indeed is the tendency to such a coalition, and such its corrupting influence on both parties, that the danger cannot be too carefully guarded against.”
― James Madison, James Madison: Writings

Madison’s words are as true today as when he originally penned them almost two centuries ago. Our nation’s founders separated government and religion to guard against this “corrupting influence on both parties.”

Today we are living with the results of not defending against this old error. Madison warned us to ever guard more closely against this unholy alliance.  We should have heeded his words.

Over 80% of white evangelical Christians voted for Donald Trump to be our country’s next president. They knowingly agreed with, and endorsed Trump’s clearly stated anti-Christian values.

This is a clear and present danger. The majority of those voting in this election claiming to follow Jesus Christ cast their vote for a lying, racist, fear-mongering, bigot.  They supported a xenophobic, bullying, braggart who is the antithesis of the love of Jesus Christ reflected in the gospels.

How and why this happened should ring alarms for leaders throughout the faith community. When this large a percentage of “believers” abandon the teachings of Jesus to vote for hate and fear, it is a statement that something is drastically and critically awry.

Personally, I see this as a failure of leadership, itself. There has been a significant lack of courage to address the deep divisive issues of our society from the pulpit. Christian leaders have not led by example, and have played it safe and “made nice” rather than confront un-Christian values in our congregations.

And so now, one cannot tell the believers from the nonbelievers without a program. We have met the enemy and they are us.

We live in a world where hunger can eradicated in the next 15 years. That’s a fact, not an opinion. Why, then, are not those of us claiming to follow the Prince of Peace doing all in our power to make it happen?

We live at a time when the gulf between the rich and the poor is widening at an alarming rate. Why, then, are we are have been taught that the worship of wealth is idolatry bowing before our bank accounts and continuing to pile up our possessions?

We live in an age where so many of our leaders insist we live in fear and hatred of our neighbors. The Jesus portrayed in the Gospels taught just the opposite. As His followers, as his disciples, we are to be known by our love for each other.

Our faith, what we truly believe in, is demonstrated by how we live. Our lifestyles, the daily choices we make, determine the true depth of our discipleship.

This powerful quote by Cory Booker sums it up. Talk is cheap. We show the world what we believe by the way we live.

Vonnegut nails it. There are far too many who call ourselves Christians that still live with Old Testament values. As Christians, we have been set free from the law of retribution. We live in the grace of a crucified and resurrected Christ.

The four Gospels in the New Testament are our fullest accounts of the words and teachings of Jesus. Nowhere in those four Gospels can you find Jesus blessing anger, hatred, malice, revenge or even justice. Instead, He lifts up, both by word and example, the values of love, caring, compassion, forgiveness, nonviolence and living in peace.

It’s far easier to seek revenge, to retaliate and resort to violence in response to wrongs. But, that is not what Jesus taught. It’s not Christian.  As Vonnegut says, give me a break!

Vengeance, retribution and the need to return violence for violence are all born out of fear. Perfect love casts out fear. It’s just a shame more of us who claim to follow Jesus cannot live as He taught us. Our world would be a far better place.

I don’t think Jesus really said that. At least. I cannot find it anywhere in the four gospels with which I am familiar.

But what I do find is a clear and direct mandate for all followers of Christ to treat everyone we meet, especially the poor, the hungry, and the rejected, as if they are the Christ. I read straightforward and unambiguous commands by Jesus for his disciples to feed the hungry, visit those in prison and to help those in need.

The only thing needed to reach out to help the poor is to love one another just as Christ loves us.