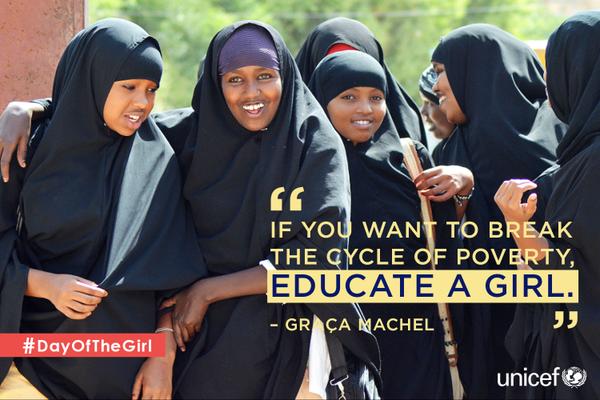 This is a powerful statement by our good friend Graca Machel. Graca is the widow of Nelson Mandela, and is a true leader in the fight against poverty, hunger and oppression in Southern Africa.

Educating girls and young women is a critical component in breaking the cycle of poverty. Graca is a strong supporter of Stop Hunger Now South Africa, and has organized and participated in several meal packaging events in South Africa and Mozambique.

The end of my trip is at hand. Early this evening I am scheduled to leave from Johannesburg and fly to Atlanta and then on to Raleigh. There I will pick up a rental car, go to the Stop Hunger Now office for a couple hours to debrief and catch up on some back administrative chores. After that, I have a 3 hour drive back home to Lynchburg.

It’s going to be a rather long trip, but what makes it worthwhile is all the good work that has been accomplished during my brief time here in Mozambique and South Africa. In Maputo, Mozambique I helped celebrate Ma Machel’s 70th birthday as we packaged 70,000 meals for malnourished school children.

That event was also a milestone for Stop Hunger Now South Africa. It was the first meal packaging event they organized outside of their own country. And the Minister of Education  for Mozambique, who attended and spoke at the event, has already requested that more meal packaging events be scheduled.

Here in Johannesburg I have had a delightful time meeting new staff and new board members. I have also been able to help with some fundraising and to give an official thanks to some of SHN South Africa biggest corporate and faith-based partners.

It’s been a whirlwind of events, meetings and dinners, but I will head for home more proud than ever of the great work being accomplished here on behalf of the hungry. Stop Hunger Now South Africa is our first international affiliate, and it is leading by example. Saira Khan, our Executive Director, and her entire board and staff are demonstrating that we can end hunger in our lifetime. Kudos and “Well Done!” to all of them.

I am truly sorry I wasn’t able to post yesterday as it was World Food Day. I didn’t get an internet connection until earlier this morning.

However, we did have a wonderful celebration yesterday. In honor of Graca Machel’s birthday Stop Hunger Now South Africa partnered with her foundation, Barlowworld and the Church of the Latter Day Saints in Maputo to package over 70,000 meals in the first meal packaging event ever held in Mozambique. It was quite a wonderful day.

Ma Machel spoke, she shared birthday cake with dozens of children, and she inspired all those gathered as she joined in to help package meals for hungry children here in Mozambique.

She clearly demonstrated why she is so beloved as she tirelessly works to keep the spirit of her late husband, Nelson Mandela, alive. She is a beautiful lady and a true leader in the fight to end hunger in our lifetime. It was a true honor to meet her and work along side her to help change our world.

It’s Thursday. That must mean I am heading back to good ol’ RDU, my second home.

This morning I will grab a rental car and drive down to Raleigh for a flight to Maputo, the capital of Mozambique. My first stop is Atlanta. Then it’s about 15 hours to Johannesburg, South Africa. The final leg  from Joburg to Maputo is only about an hour and a half, but by that point, who cares?

Although getting there is supposed to be half the fun, I think that’s the half I would love to skip. But once there, I know I will be glad I made the trip.

I have been asked to attend the birthday celebration of Nelson Mandela’s widow. It’s a long way to travel for a birthday party, but this is a most special lady, a good friend and a strong supporter of Stop Hunger Now in South Africa and Mozambique. She is a true champion of ending hunger in our lifetime.

So, it’s back on the road again. Stay tuned. There will be plenty more to come as the adventure unfolds.