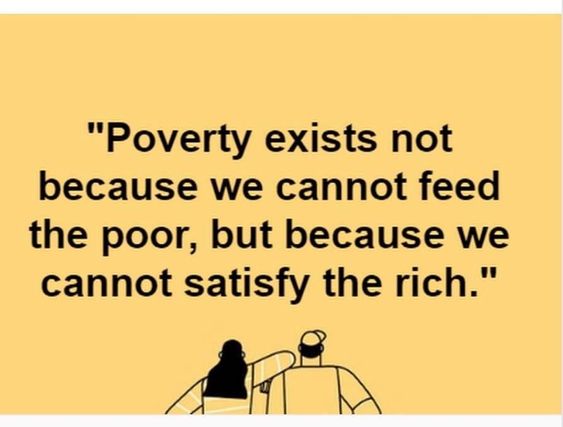 Poverty exists because we lack  community. There is no true sense of all being part of one family serving and caring for one another. Those of us with more of the world’s resources than we need refuse to share the life-saving necessities with brothers and sisters who are daily dying for their lack of what we waste. 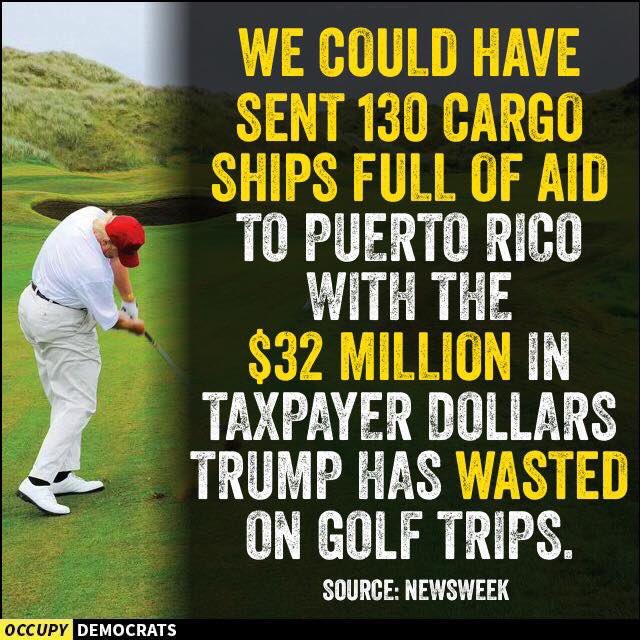 #BLOTUS has to have time to relax, right? We all know he’s under immense pressure. Surely his time on the golf courses cannot be seen as a dereliction of his presidential duties,  After all, who wants a duffer for their leader, right?

On the other hand, another 32 million dollars in aid to Puerto Rico would surely demonstrate a compassionate and caring side of this pumpkin-hued moron that the world has never seen. But, to be fair, I guess that the world can never see what is not there. The key to ending hunger in our lifetime is taking action. We just need to care enough to act. Does anyone else find it interesting that just when the #BLOTUS approval rating has sunk to its lowest (34%). the time is just right to spend $60,000,000 or so to demonstrate his newly found “outrage?” We all have been told that the pen is mightier than the sword. And although I agree, words in and of themselves cannot change the world.

But speaking up, speaking out, is not enough. We must come to the place where we distill our feelings into pure action. We need to translate our compassion and need for global justice into the pure eloquence of action. Only then will we achieve the global good we all seek.

He looked at the piles of food again, and it was like he was seeing it with new eyes. “This is wrong”, he thought, “Letting food rot while people die of hunger. It’s evil.”….
He breathed in the too-sweet smell of rotting food, “I can stop this evil.

This passage from Margaret Haddix’s book, Among the Enemy, brings back all too vivid memories of the piles of rotting potatoes that were the catalyst for the the Society of Saint Andrew’s “Potato Project.” Once you smell 50-60,000 pounds of decomposing potatoes…well, it’s something that is hard to forget. Let’s just say it sticks with you.

I was privileged to live on Virginia’s Eastern Shore for two years while I was the pastor of the three rural United Methodist Churches that composed the Oak Hall Charge. It was a great two years. My son started first grade there, and one day when he got off the bus he excitedly told me about the enormous piles of potatoes he had seen in the woods during his bus ride home from school. A few days later, as I was out visiting church members I passed by the site and saw the rotting potatoes for myself.

It was actually almost four years later that those tons of rotting spuds manifested themselves into the beginnings of the Potato Project, yet the power of those rotting potatoes remains as strong for me today as it did over 35 years ago. The too-sweet smell of rotting food is an evil that is far too real in a world of hunger and malnutrition.

The Society of Saint Andrew’s Potato Project and it’s Gleaning Network are perfect examples of how to help. Since these programs began they have kept billions of servings of nutritious produce from being wasted, and have made sure that produce has reached the plates of the poor and hungry here in the United States.

Working together we can end hunger in our lifetime. Getting rid of the too-sweet smell of rotting food is a good place to start.

I am pleased that Pope Francis is serious about his commitment to the poor and hungry. Here is an unedited press release from the United Nations Food & Agriculture Organization of the Pope’s address to that body. This is a faith leader leading by example.

Pope Francis: Starvation in a world of plenty “scandalous”

20 June 2013, Vatican City/Rome, Italy – Pope Francis lauded participants in the 38th FAO Conference for working together against hunger but urged countries to “move beyond indifference” in policies that exclude the most vulnerable and exacerbate hunger and poverty in the world.

“It is a well-known fact that current levels of production are sufficient, yet millions of people are still suffering and dying of starvation. This is truly scandalous,” Pope Francis said, during an audience at the Vatican.

The Pope received the delegates, who represented countries from every region of the world, in keeping with a tradition that began 60 years ago. He thanked and encouraged FAO for its work.

Saying the global economic crisis could not “continue to be used as an alibi,” the pontiff added, “The crisis will not be completely over until situations and living conditions are examined in terms of the human person and human dignity.”

The pope warned that people and their dignity risked “turning into vague abstractions in the face of issues like the use of force, war, malnutrition, marginalization, the violation of basic liberties, and financial speculation, which presently affects the price of food, treating it like any other merchandise and overlooking its primary function.”

“There is a need to oppose the shortsighted economic interests and the mentality of power of a relative few who exclude the majority of the world’s peoples, generating poverty and marginalization and causing a breakdown in society.”

Mohammad Asif Rahimi, Chairperson of the FAO Conference and Afghanistan’s Minister of Agriculture, Irrigation and Livestock was joined by FAO Director-General Josè Graziano da Silva and hundreds of representatives of FAO member countries from every region of the world.

“It was inspiring when His Holiness stated that a way has to be found to enable everyone to benefit from the fruits of the earth in a fair and just manner,” Rahimi said.

“FAO, in turn, is counting on the impact that Pope Francis and leaders of all religious faiths can have in mobilizing governments, organizations, companies and communities to take action and defend the right to food of those who are most vulnerable,” Rahimi added.

“The fight against hunger must have no color, no religion, no political affiliation. Ending hunger is absolutely necessary if we want a truly sustainable and more secure future. It makes political and economic sense, but morally and ethically, it is also the right thing to do,” FAO Director-General José Graziano da Silva added.

“Two weeks earlier, Pope Francis spoke out against the culture of waste that leads to the loss of 1.3 billion tons of food every year. The pontiff said that it was ‘like stealing food from poor people’, and he was right. But we are also squandering entire generations of lives to starvation, inadequate nutrition and poor health. And this is hurting us all,” the FAO head said.

The FAO Conference is the organization’s highest governing body. Delegates represent FAO member countries, which number 194 in all.